And, while we couldn’t possibly share everything we learned, here are a few fun facts.

1. First off, we should probably clarify what we mean by “prehistoric.” We’re not talking about dinosaurs (though they were prehistoric too.)

“Prehistoric” means before written history. In this instance, that means 1500 A.D. and earlier. Because—while the Native Americans of Ohio built enormous monuments and mastered agriculture, hunting and trading—they didn’t write much about it.

2. Because we don’t have written records, we use artifacts to learn about Ohio’s earliest residents.

The earliest artifacts we’ve found so far go back to about 13,000 BC during the Pre-Paleo or Clovis Era.

This was during the tail stretch of the most recent Ice Age where, at its peak, two-thirds of Ohio was covered in glaciers.

One of the most common types of artifacts we find are projectile points from hunting weapons.

Each projectile point tell us something about the people who made them: what materials they had access to; what tools they fashioned; and what they hunted.

For example, in the Pre-Paleo Era, people hunted the megafauna (including the famous mastodons and mammoths) as one of their sources of food.

That means the hunters fashioned long and stout thrusting spears. This way, they could attack their massive prey without getting too close.

3. As eras changed, so did people’s prey.

(The megafauna of the Ice Age didn’t survive the great thaw. Most theories point to some combination of climate change and human predation.)

And when the prey changed, so did the tools used to hunt them.

In the Paleo and Early Archaic eras (12,000 BC to 6500 BC,) people began using smaller and lighter weapons.

When you think of Native Americans and hunting, you might picture bows and arrows; but that’s relatively modern technology, according to Urbanski.

Before then, people used spears, atlatls, axes and knives.

4. And what did they make these weapons from?

Flint—most of it mined from Flint Ridge in Ohio. In fact, you can still see pits, pot holes and paths from where they quarried the stone.

And these Ohio-made tools were popular in the prehistoric world and have been found at American Indian sites across the present-day eastern United States. Ohio flint knappers would trade their products for copper, mica, shells and other goods.

5. But what about the mounds?

The large mounds built by the Fort Ancient, Hopewell and Adena cultures are, by far, the most conspicuous artifacts left behind by our prehistoric predecessors.

(A quick note: these groups that we call “Hopewell” or “Adena” didn’t call themselves that. We don’t know what they called themselves. We gave them those names because of where we found their artifacts. For example, the first Adena artifacts were found on the grounds of the Adena Mansion where our sixth governor, Thomas Worthington, lived.)

The mounds are impressive. For example. Serpent Mound in Adams County is more than 1,300 feet long.

But why were they built? Were they burial mounds? Gathering places? Did they serve a religious purpose?

The answer isn’t simple. After all, these mounds were built by different people and different cultures over thousands of years.

But, yes, some were burial mounds. The Miamisburg Mound served as a cemetery for several generations. It may have also marked the border of a territory.

But Serpent Mound has no human remains in it at all. Instead, it may have served an agricultural or astrological purpose.

The mound is shaped like an animal—specifically, a snake, which you probably guessed. (It’s one of Ohio’s two effigy mounds; the other, the Alligator Mound in Licking County.) The head of the serpent is aligned with the summer solstice sunset and its coils may point to the winter solstice and the equinox sunrise.

You may also wonder what happened to the large, successful civilizations that built these mounds, traded with far-flung people, and cultivated agriculture.

Not yet, at least.

Fortunately, there are always more artifacts to find. 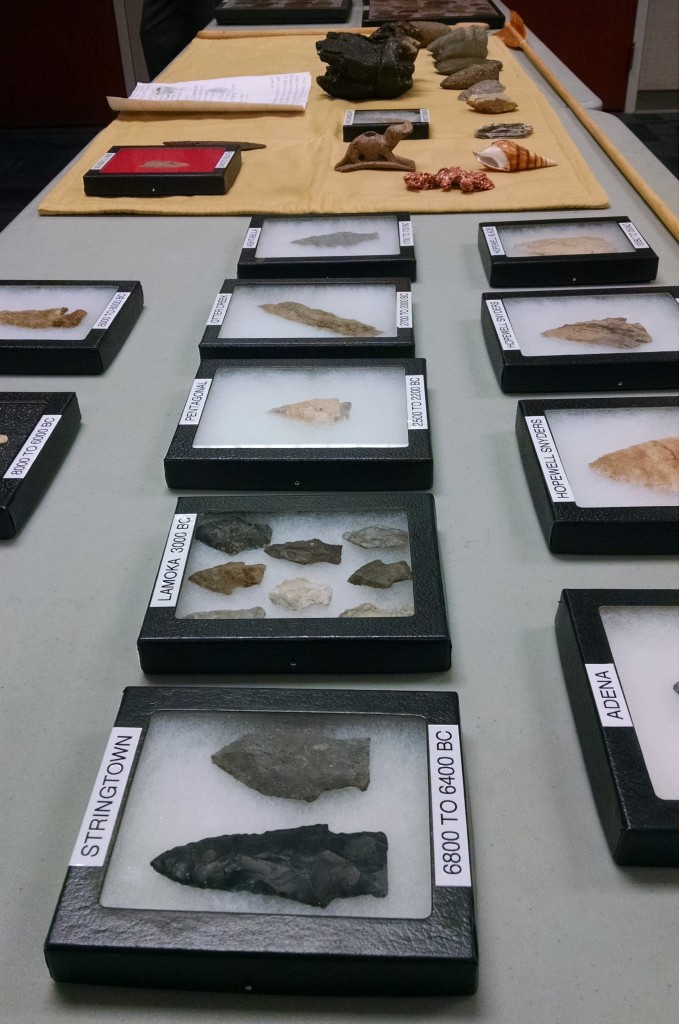 This is National Library Week. As part of our week-long celebration of libraries, we’ll also have programs about:

All of our National Library Week programs are free and open to the public. However, some require registration. You can either sign up on our event calendar or call us to register.