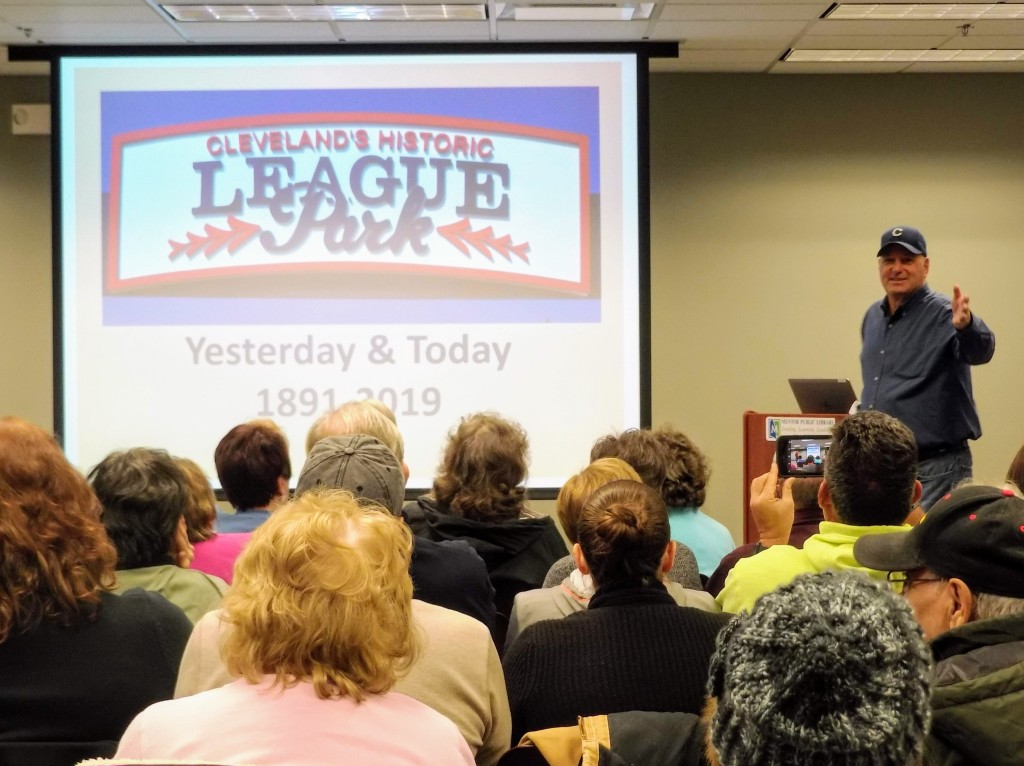 Ken Krsolovic and Bryan Fritz talk about the legendary League Park in front of a standing-room-only crowd at Mentor Public Library.

Local authors and sports fans Ken Krsolovic and Bryan Fritz visited us earlier this week to talk about League Park – the legendary home of the Cleveland Indians for decades.

Here are five fascinating facts that we learned from listening to Krsolovic and Fritz.

1. One of the best pitchers the game has ever seen pitched for the Cleveland Spiders on League Park’s first Opening Day in 1891 – none other than Cy Young.

He’d pitch several more opening day games there before his retirement (and he’d win all but one of them.) 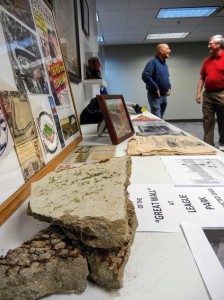 The authors brought artifacts with them, including a piece of League Park’s Great Wall.

2. Nap Lajoie was such a big star that when he came to Cleveland they renamed the team for him. However, when he joined the Cleveland Bronchos in 1902, he was in the midst of a legal kerfuffle with his previous team, the Phillies.

Due to an existing contract with the Phillies, a judge declared that Lajoie could only play baseball for them. However, an enterprising lawyer discovered that the injunction could only be enforced in Pennsylvania.

Consequently, when the Bronchos/Naps played the Athletics in 1902 and most of 1903, Lajoie would visit Atlantic City, instead. Peace wasn’t made between the National and American Leagues until 1903 with an agreement that also created the World Series.

3. League Park was initially constructed entirely of wood. But, by 1909, wood was no good.

More modern stadiums were made of steel and concrete. They could fit more seats, which meant more fans and more money.

For its upgrade, the Cleveland team relied on the legendary Osborn Engineering firm, which also designed Yankee Stadium, Fenway Park and Comiskey Park.

Most importantly, Osborn was then and still is headquartered in Cleveland. 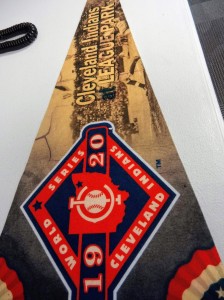 4. League Park was the site of the Cleveland Indians first World Series victory in 1920. The Indians beat the Brooklyn Robins 5-2, which looks like a typo unless you know that from 1919 to 1921 the World Series was best of nine.

While the Indians won, no Robin had a worse series than Cleveland native Rube Marquard. Not only did his team lose, but he was convicted of ticket scalping (his punishment: $1 fine and $2.80 in court costs) and his wife divorced him the same week.

Marquard got something like the last laugh, seeing as he’s since been inducted into the baseball Hall of Fame.

5. League Park was also the scene of Joe DiMaggio’s 56th and final game in his legendary hitting streak.

For more fun stories from League Park history, read Krsolovic and Fritz’s League Park: Historic Home of Cleveland Baseball, 1891-1946. You can borrow one of our copies