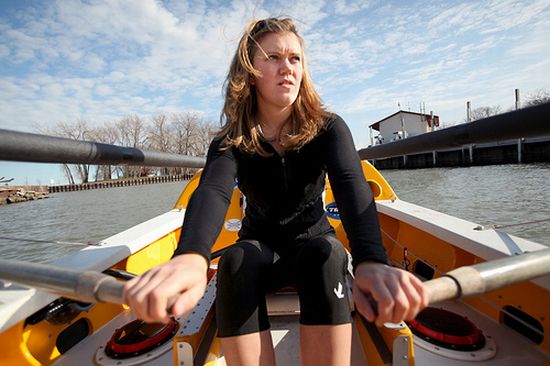 Katie Spotz learned a lot while rowing across the Atlantic Ocean. She shares that knowledge in her new book, “Just Keep Rowing.”

She learned a lot while rowing solo across the Atlantic Ocean and she shared some of those lessons when she visited Mentor Public Library earlier this week.

A Long Journey Begins with a Single Step

Spotz has swam the length of the Allegheny River, ran across deserts and biked across the country with a broken pelvis. All of those overwhelming tasks were made possible by breaking them into less intimidating chunks.

Wake up to Water

Every morning during Spotz’s record-breaking row, she woke up surrounded by water that she couldn’t drink.

That seems like a bizarre circumstance when you grow up near the planet’s largest freshwater source, but it’s reality for a lot of people. One in eight people don’t have access to clean water that’s safe to drink.

That’s why a portion of the proceeds from Just Keep Rowing go to H2O for Life, a nonprofit that develops service-learning programs to provide clean-water projects to schools around the world.

Spotz spent 70 days by herself in a rowboat. She saw sharks, birds, dolphins and tankers but no people for more than two months.

She used meditation to prepare herself for that type of solitude but admits you can only prepare so much.

“It’s still a jump to go from not speaking to someone for a few hours to one or two days to 70 days,” she said.

Life Is a Team Sport

Spotz may have rowed alone but that doesn’t mean she did it by herself.

She had the help of trainers, experts—for example, a weatherman helped her plot a course that took advantage of prevailing currents—sponsors who provided tens of thousands of dollars because they believed in her mission, and, of course, her family.

Whenever you’re doing something difficult, assemble a good team and then trust them to support you.

See the Bioluminescence in Everyone

Spotz saw a lot of beautiful things while out on the water—the unhindered night sky, both the peace and tempest of the ocean—but nothing was more memorable than the plankton.

The tiny organisms were bioluminescent, meaning they glowed at night. Spotz compared passing through the plankton to rowing through millions of tiny, twinkling stars.

You don’t really think of plankton as pretty. Spotz said the ocean taught her that there’s beauty in everything and joy in finding that beauty.

What Does Not Kill You Makes You Stronger

Everything won’t always go right. Spotz had two fires on her boat during her row. She broke her pelvis while preparing for a cross-country bike ride.

Those setbacks didn’t force her to quit. Instead, she adapted her plans and overcame those hardships.

Spotz doesn’t undersell the difficulty of running across a desert, swimming a river or rowing 3,000 miles; but she says the most difficult part of these challenges is mental, not physical.

Sometimes you have to convince yourself something is possible before you can do it.

These are just seven of the 70 lessons Spotz discusses in Just Keep Rowing. You can buy the book online or check it out from Mentor Library.