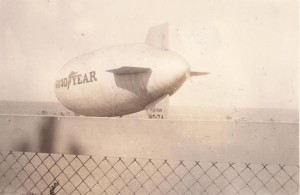 The city of Akron, Ohio, had an outsized impact during World War II.

Its citizens served in Europe and the South Pacific. Goodyear built blimps that hunted Nazi submarines. And some of the city’s most renowned residents had a personal tie to the war.

You can learn more about Akron’s role in World War II when author and historian Tim Carroll visits at 6:30 p.m. on Monday, July 22, at our Main Branch.

Carroll is an Akron native, and both of his grandfathers were drafted before Pearl Harbor. He wrote World War II Akron, which explains the city and its people’s role in the war. If you want to read the book before Carroll’s talk, you can borrow a copy from us or on Hoopla.

By the way, if you’re interested in history, we’ve hosted several programs and lectures about World War II — many of which you can watch online. This includes WWII veteran and Purple Heart recipient Bob Zonneville sharing his experiences from the front line.

Zonneville and local historian Thom Matowitz also spoke at the library to discuss what life was like for WWII veterans when they returned home.

Furthermore, our own Dr. John Foster — who, in addition to being a reference librarian, has a doctorate degree in history with a specialization in Modern German History — has given several lectures on WWII and the Holocaust that you can watch online.

Finally, we have hundreds — not an exaggeration — of books and documentaries about World War II that are free to borrow with your library card.