Banned Books Week & Why It Matters 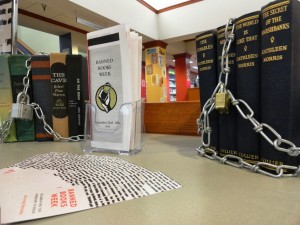 Banned Books Week celebrates books that some have tried to bowdlerize, censor and ban.

From Sept. 21 to 27, libraries and schools across the country will recognize Banned Books Week.

It’s a chance for us to remind you about all the society-changing books that have been banned or challenged. And there’s a good chance that list includes your personal favorite.

Imagine your bookshelf without To Kill a Mockingbird, Color Purple, Animal Farm, Lord of the Rings or Harry Potter.

And you might say: But that was a long time ago. We don’t still do stuff like that today?

Legislators in South Carolina planned to cut some funding to state colleges after the College of Charleston picked Alison Bechdel’s Fun Home as assigned reading. Bechdel is an award-winning cartoonist. You can probably guess what upset legislators based upon the name of Bechdel’s comic strip, Dykes to Watch Out For.

(You may also know her as the creator of the Bechdel Test, which challenges movies on a single parameter. Does a movie have at least two women, and do they talk about something other than a man in at least one scene? It’s astonishing how many films fail to cross that low threshold.)

Cartoons and graphic novels seem especially prone to challenges, because they are still perceived as low art.

Banned Book Weeks isn’t just about championing books that other people might have concerns about. After all, everyone’s entitled to their own taste in literature.

Banned Books Week is about having the freedom to read

There’s a reason we chose “Bradbury” as the password in our Banned Books video last year.

Ray Bradbury said, “You don’t have to burn books to destroy a culture. Just get people to stop reading them.”

Read a book that’s been banned or challenged. Read whatever you like.

But read. And decide for yourself what belongs on your bookshelf.