Cleveland storyteller shares stories about the women of Millionaire’s Row 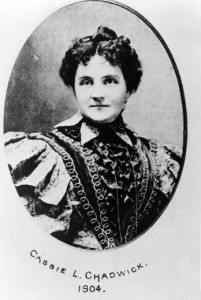 Cassie Chadwick, a legendary swindler who tried to steal from the Cleveland Trust and Andrew Carnegie’s estate, is both famous and infamous.

Cleveland storyteller Dan Ruminski returned to Mentor Library Monday to share stories about the women of Millionaire’s Row—the famous, the infamous and those who were a bit of both.

Laura Mae Corrigan was a bit of everything in her time: waitress, society reporter, (if her reputation is merited) seductress, social outcast, arbiter of London society, millionaire, and even war hero.

She was born in Wisconsin to a family with no money or social standing to speak of; but, through her cunning, rose to the heights of wealth and society.

She married “Playboy” Jimmy Corrigan, the son of industrial millionaire James C. Corrigan. (The father’s Corrigan-McKinney Steel Company would eventually become Republic Steel. Most of what you need to know about the younger James Corrigan is condensed in his nickname.)

Laura Mae left her previous husband, a doctor whom she met while working as a society reporter in Chicago, to marry Jimmy. Her status as both unmoneyed and a divorcee made her persona non grata among the Cleveland and New York City elite.

She and her husband moved to Europe and were accepted (if not embraced) by the European elite who were too happy to trade title for money.

After her husband died, she was left exceedingly wealthy with a value that accrued $800,000 a year in interest alone.

But instead of simply throwing parties, she used  her wealth to good effect.

During World War II, she created and funded an aid group called La Bienvenue. After the war, she was honored with King’s Medal by the British and the Croix de Guerre, Legion of Honor, and Croix de Combattant from the French.

Not bad for a party girl of ill repute.

You probably recognize Julia Drury‘s last name but may not realize why. Hint: If you visit Playhouse Square, you’ll find Francis Drury Theater. It’s named after her husband who was an early patron of our local arts scene.

They lived in the last of the great mansions of Millionaire’s Row. (The home is actually still standing and owned by the Cleveland Clinic.) But Francis fancied himself a gentleman farmer and moved his family to a farm in Gates Mills—which, back then, counted as “the country.”

However, Julia pined for the city. Even after going on a yearlong, all-expenses-paid trip to Europe to buy art for their country home, Julia still preferred her Cleveland mansion.

Give Cassie Chadwick her due. She had guts. After all, there weren’t any cowards trying to extort Andrew Carnegie’s estate.

Chadwick had worked as a clairvoyant and had already been divorced twice when she opened a brothel that occasionally catered to Cleveland’s elite. However, it was she who came to the attention of wealthy widower, Dr. Leroy Chadwick.

She then began her largest con, convincing the world (or at least its bankers) that she was Carnegie’s illegitimate daughter.

She used the Carnegie name to coax more than $10 million in loans from banks. Meanwhile, the banks assumed they would be made whole when Carnegie died. Of course, nobody dared ask Carnegie directly for fear of embarrassing him.

Ultimately, Chadwick’s ruse was discovered when a bank tried to pull her loan and she couldn’t pay it. She was sentenced to 14 years for fraud but died in prison before she could complete her sentence.

For more stories from Millionaire’s Row, check out Dan Ruminski’s book, Cleveland in the Gilded Age.