Be your own hero at Mentor Library’s Comics Club 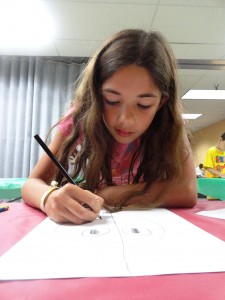 Abby draws her own superhero during Mentor Library’s Comics Club.

A bisected page, two large eyes, the beginnings of a mouth—Abby is drawing a superhero she created during the most recent meeting of Mentor Library’s Comics Club.

“Her name is Hula,” she explains. “She uses her hula hoop to trap bad guys.”

The scene is decidedly relaxed during the latter half of the meeting. Some children draw—characters they’ve created, their Minecraft avatars—while others read graphic novels or issues of Tiny Titans and Adventure Time.

While most people associate comics with superheroes, the Comics Club is eclectic by design. One month they’re designing their own sidekicks. The next they’re reading independent web comics.

Our Comics Club is for any 8- through 12-year-old who likes to read, talk about or draw sequential art. We love everything from Amelia Rules to Batman to Bone.)

Our Comic Club meets from 7 to 8 p.m. on the first Tuesday of every month at our Main Branch.

At a typical meeting, the kids talk about a special theme. Then we introduce the kids to graphic novels and comics that can be found in the library’s collection.

We close out each meeting with free time for the kids to draw or read.

“Their favorite part of the night is drawing time,” Schulz said. “We use templates that resemble comic strips and comic-book pages, so the kids can do short 3-panel or longer stories. Some have created their own characters that they revisit every month while others draw something new every time.”

The next Comics Club meeting will be at 7 p.m. on Oct. 7 at the Mentor Public Library’s Main Branch. The theme for next month will be costumes. 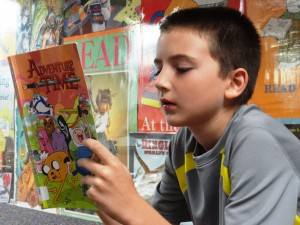 Nicholas checks out an issue of Adventure Time during our Comics Club.

This entry was posted in Uncategorized and tagged Comics Club, Mentor Public Library. Bookmark the permalink.