Aside from the occasional visit by Mark Twain, it’s difficult to convince dead authors to speak at the library. So we considered it quite a coup when Edgar Allan Poe agreed to talk at Mentor Public Library this Friday.

Sure, it wasn’t Poe, per se, but Jim Knight performing as Poe. But considering Poe has been quite dead for quite some time, Knight serves as an excellent substitute

In addition to hearing The Tell-Tale Heart and The Raven, we learned a few interesting facts about Poe’s life on Friday.

For example, Poe never considered himself a horror, suspense or even a mystery writer. He was a romantic and nearly everything he wrote—even the macabre stuff—was in the pursuit of beauty. (Of course, you may disagree with what he considers beautiful.)

Oh, and he loathed Longfellow.

As we may have mentioned a few dozen times, we turned July into Know Poe month. We’ve celebrated all aspects of Poe this month: his writing; his influence on art and cinema; his groundbreaking work in suspense and detective fiction; his interest in codes and cryptography. It wasn’t easy, but we even found an age-appropriate way to introduce Poe to kids.

We’ve given away hundreds of collections of Poe’s poetry and short stories (and a few snazzy Know Poe T-shirts, as well.) 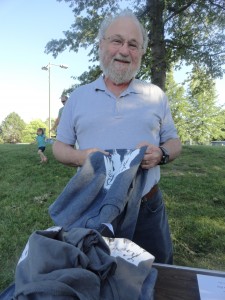 This gentleman earned his Know Poe shirt by quoting the entirety of “The Raven” to us during a Flash Library at the park.

The festivities—or, rather, since we’re talking about Poe, perhaps, we should say “the oddities”—are almost concluded. But there’s still time to join us for one final Know Poe book talk. It’s this Thursday, July 31, at 7 p.m. in Wildwood Cultural Center.

Join us for a discussion on Poe. Talk about what you loved, what you disliked, what scared you, what impressed you about him. Find out what other people thought.

We hope you join us and we hope you enjoyed getting to Know Poe this July.