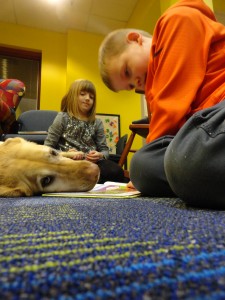 Jake and Claire take turns reading to Jazzy during Paws to Read at Mentor Library.

I’ve mentioned Paws to Read before, and I’m going to mention it again sometime soon; because it’s a great program, and I want as many people as possible to know about it.

Paws to Read is for readers between the ages of six and 12 years old. Mentor Library hosts it on the third Wednesday of the month at either its Main or Mentor-on-the-Lake Branch. 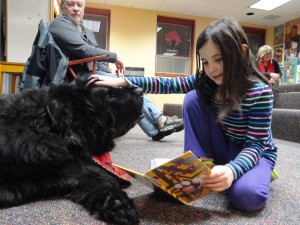 The next session is scheduled for Wednesday, March 18, at Mentor Library’s Main Branch.

Registration fills up quickly, so contact the children’s department at Mentor Public Library soon if you think you child could benefit from Paws to Read. (There is often a waiting list for the program once registration begins.)

For more information on Paws to Read and other children’s programs at Mentor Public Library call (440)257-2512.

Payton gives Caesar a belly scratch in between books.