Paws to Read: The Difference a Dog Makes 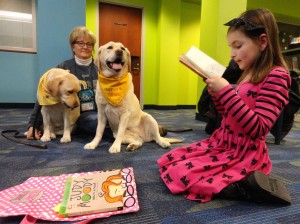 Taylor reads to a pair of therapy dogs—Honey (on the left) and Hannah—during Paws to Read at Mentor Library.

Taylor didn’t like reading in front of people. She could read the words as well as any kindergartener, but it made her nervous when someone listened, her mother Donna explained.

Then Donna found the least judgmental audience in the world —the therapy dogs at Mentor Library’s Paws to Read.

So Taylor started reading to the dogs, and they never corrected her pronunciation or narrowed their eyes if she didn’t know a word. They just rested their heads next to her and occasionally angled for a belly scratch.

Soon Taylor enjoyed reading so much that she didn’t care who listened.

Taylor’s in second grade now and reads at a 3.4 Level. She still goes to Paws to Read, but now it’s just for the fun of it.

Her mother Donna was so impressed that she got her dog, Jazzy, registered as a therapy dog; and now Jazzy helps young readers get over their worries, just like other canines did for Taylor.

Paws to Read is for readers between the ages of six and 12 years old. Mentor Library hosts it on the third Wednesday of the month at either its Main or Mentor-on-the-Lake Branch.

The next session is scheduled for Wednesday, Feb. 18, at Mentor Library’s Main Branch.

Registration fills up quickly, so contact the children’s department at Mentor Public Library soon if you think you child could benefit from Paws to Read. (There is often a waiting list for the program once registration begins.) 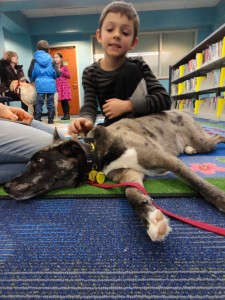