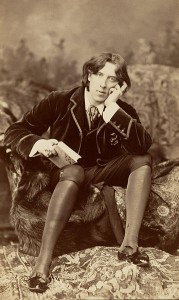 In addition to being a better writer than most of humanity, Oscar Wilde was also better dressed

Tired of shouting Erin go bragh or “may the road rise to meet you” already?

It’s splendid to celebrate Ireland, but the Irish have given us far too many quotable toasts and toastable quotes for us to settle on the same chestnuts over and over.

So shout these as you raise a draught or a pint or a shot (or a glass of water. There’s nothing wrong with being the sober one, even on St. Patrick’s Day.)

1. I wish you and yours every joy in life, old chap, and tons of money, and may you never die till I shoot you. -James Joyce

2. True friends stab you in the front. -Oscar Wilde

3. All the world’s a stage and most of us are desperately unrehearsed. -Sean O’Casey

4. I showed my appreciation of my native land in the usual way—by getting out of it as soon as I possibly could. -George Bernard Shaw

5. If it was raining soup, the Irish would be out with forks. -Brendan Behan

6. Ireland, sir, for good or evil, is like no other place under heaven, and no man can touch its sod or breathe its air without becoming better or worse. -George Bernard Shaw

7. When I die I want to decompose in a barrel of porter and have it served in all the pubs in Dublin. -J. P. Donleavy

11. Cast your mind on other days
That we in coming days may be
Still the indomitable Irishry
-William Butler Yeats

Have a fun, happy and safe St. Patrick’s Day!