What Do Your Dreams Mean? 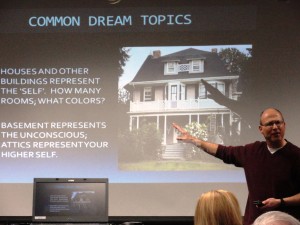 Lakeland Associate Professor Anthony Palermo explains the what buildings usually stand for in our dreams.

They answered questions almost everyone has: What our dreams? Why do we have them and what do they mean?
While I can’t recapitulate all the insight Palermo and Dailey provided, I do want to offer some of the highlights.
For example, Palermo explained what common symbols in dreams mean.
Flying in a dream represents freedom and creativity.
A house or building represents the person who’s dreaming; the rooms, different aspects of the person; and the basement, his or her subconscious.
Both falling and being chased are classic personifications of anxieties. (When you wake abruptly from a falling dream, that’s called a hypnic jerk.)
The shadow represents our double which does, in dreams, the things we would never do while awake.
It’s not uncommon to dream of yourself as the other sex. An anima is the female aspect of the male self, and the animus if the male aspect of the female self.
Recurring dreams represent unresolved problems, and premonitory dreams are things “the unconscious can see” that the conscious won’t acknowledge, Palermo said.
Speaking of which, several famous scientists, authors and politicians had dreams that helped guide their work. Friedrich Kekule had difficulty constructing a benzene molecule until he dreamed of it as an ouroboros ring. That structure turned out to be accurate.
The same thing happened to Niels Bohr who dreamed of electrons rotating around the nucleus. He won a Nobel Prize for following (and verifying) his dream.
Albert Einstein dreamed of seeing the extended spectrum of colors while traveling at the speed of light. He later said, “My entire scientific career has been a meditation on that dream.”
The list continues: Harriet Tubman trusted her dreams to select routes along the Underground Railroad; Abraham Lincoln predicted his death in a dream two days before he was assassinated; and Samuel Taylor Coleridge and Mary Shelley dreamed of Kubla Khan and Frankenstein, respectively, before they wrote them.
Finally, Palermo said that there are three levels to dreaming.
Level one are dreams that depict the day’s events. Level-two dreams contain personal symbolism. And dreams of the third level contain what Carl Jung referred to as archetypes.
Jung, a student of Sigmund Freud, believed that there are certain characters and motifs that appeared in every culture’s imaginations: the hero, mother, child, trickster, flood, dragon and so on.
Furthermore, Jung believed that archetypical dreams tapped into something he called the collective unconscious.
If Jung’s correct, not only do all people share the act of dreaming, but our dreams connect us all at a basic level.
In other words, dreams show us that we all may have more in common than we thought.
Thanks to Palermo, Dailey and everyone who came to their talk Monday. For more information on programs and events at Mentor Public Library, visit our web site or call 440-255-8811.
This entry was posted in Uncategorized and tagged Dreams, Lakeland Community College, Mentor Public Library, symbolism. Bookmark the permalink.